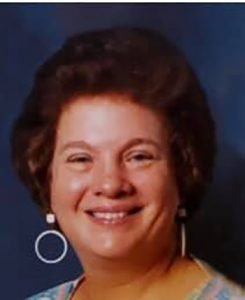 Condolences to Dave and the family…
Carolyn Aleksa Lawry passed away on July 2, 2021 after a long battle with illness. Carolyn was born on June 16, 1942 in Sharon, PA. She graduated from West Middlesex High School as its salutatorian in 1960.
She attended Alliance College where she met and later married David Lawry from Pittsburg, PA.
She and David lived in Europe for three and a half years where she traveled extensively on the continent. After moving back to the U.S., they continued to travel extensively in the U.S. Her favorite destinations were Alaska and Hawaii.
After raising her six children, Carolyn worked as an administrative assistant for Rolls Royce for over 15 years. Despite losing a leg to cancer, she continued to work at Rolls Royce, support her family and Catholic charities, including St. Vincent De Paul and The Little Sisters of the Poor.
Carolyn loved having a game of cards with family or friends and often had extra guests at family dinners, such as Thanksgiving and 4th of July celebrations. She was an excellent seamstress, loved crossword puzzles and a good game of Bingo.
Carolyn is survived by her husband David; her six children, Joseph Lawry, William (Cheryl) Lawry, John (Kim) Lawry, Mark (Elisabeth) Lawry, Susan (Adam) Jacob, and Donna (Martin) Megregian; nine grandchildren, Madi, Nathan, Aleksa, Brett, Jazmyn, Evan, Kiefer, Allison, and David; three sisters, Alexis Weaver, Candus Aleksa, and Fedra (Richard) Carpenter.
Carolyn’s life celebration visitation will be held at Indiana Funeral Care, 2433 E. Main Street, Greenwood, IN on Friday, July 9, 2021 from 6:00 pm – 8:00 pm.
The Mass of Christian burial will be held on Saturday, July 10, 2021 at 10:00 am at Our Lady of the Greenwood Catholic Church, 335 S Meridian St., Greenwood, IN.
Burial will be at Arlington National Cemetery, where she will be laid to rest beside her stillborn daughter, Ruthann.