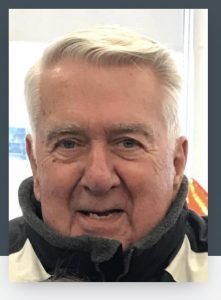 We are sad to announce the passing of Chester “Chet” Gomula, of Pittsfield, who died Tuesday, October 4, 2022, at age 81. Born in Pittsfield, MA, on February 1, 1941, the son of the late Walter and Wanda Walzak Gomula, he graduated from Pittsfield High School with the class of 1958, and later attended Alliance College in Cambridge Springs, Pa.
Following this, from 1963 to 1965, Chet served in the United States Army. For most of his career, he worked for General Electric and then at Lockheed Martin, from where he retired in 1996. Chet was a member of St. Charles Church. He loved traveling, walking, being the “mayor of Kellie Drive” and spending time with his family and friends. He was always quick with a joke and made everyone around him feel special.
Survivors include his wife of 54 years, Marcia Kelly Gomula, whom he married on May 4, 1968, at St. Mary’s Church in Lee, MA. He also leaves behind his son Marcus Gomula, daughter-in-law Shannon, and grandchildren Hayden and Jack from Andover, MA; his daughter Sheila Gaglione, son-in-law Jeff, and grandchildren Ryan and Chris from Framingham MA; and his son David Gomula and grandson Connor from Pittsfield. Chet is also survived by his sister Louise Perrone, several brothers-in-law, sisters-in-law and nieces and nephews. He was predeceased by his brother Francis Gomula.
Chet’s family would like to extend a special thanks to all the workers at HospiceCare in the Berkshires and Kimball Farms Life Enrichment Program for their outstanding care and compassion throughout this difficult time.
Donations in Chet’s memory can be made to HospiceCare in the Berkshires, www.hcib.org or St. Jude Children’s Research Hospital, www.stjude.org. Please visit www.dwyerfuneral.com to leave condolences and remembrances.