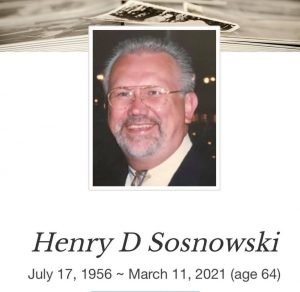 Henry Dominic “Hank” Sosnowski of Lakeland, Florida, age 64, passed away on Thursday, March 11, 2021 of natural causes.
Born in Philadelphia, Pennsylvania on July 17, 1956, he was the son of Theodore E. Sosnowski and Sophia A. Sosnowski (nee Dudek). He was the Godson of Jean Dudek (Philadelphia) and Stanley Woytysiak (Connecticut), grandson of Henryk and Katarzyna Dudek and Dominic and Josephine Sosnowski. The love of his life and his wife Linda, passed in July, 2019.
He is survived by his sister Kasia (Kalman) Fogarasi, Krysia (Gary) McCurdy and brother Paul, his nephews Bijan and Dariush – who were the jewels in his life – Jason & Kala & many cousins and great friends. He had a close relationship with his siblings who enjoyed being together particularly for the Polish custom of Wigilia on Christmas Eve.
Henry attended and graduated from St. Josaphat’s grade school, Roxborough High School, Alliance College and St. Joseph’s University where he received a Master’s Degree in Health Administration. Hank had a successful career in Healthcare Administration.
Hank was extremely proud of his Polish-American Heritage and was involved with the community in Philadelphia. He was a member and former President for many years of the Polish Falcons of America Nest 171, Manayunk, PA and Polish American Congress.
He served for many years as the Chairman of the Formation Committee of the annual Pulaski Day Parade.
Henry’s faith was strong and he enjoyed attending Legacy Church in Lakeland. He was dedicated to the family of AA and the friends he met in Lakeland.
He was a talented athlete in high school and played baseball at Alliance College in Cambridge Springs, Pa.
In his later years he enjoyed the company of brother Paul and nephews Bijan and Dariush attending Spring Training games for 10 years especially Detroit games in Lakeland and Phillies games in Clearwater.
He loved the Philadelphia Eagles and Sixers and attended many games.
We will always remember his smile, his warmth, his unique humor and his intelligence. He was a very good man.
Farewell Henry. Fear not. We love you. May you rest in Peace.
A Memorial Service and mass will be held in July of 2021.
Donations in his name would be appreciated to The Wilson House Inc., 510 Wildlife Trail, Lakeland, Florida 33809 OR Polish American Cultural Center, 308 Walnut Street, Philadelphia, PA 19103.
————-
RIP Hank from your Alliance family.