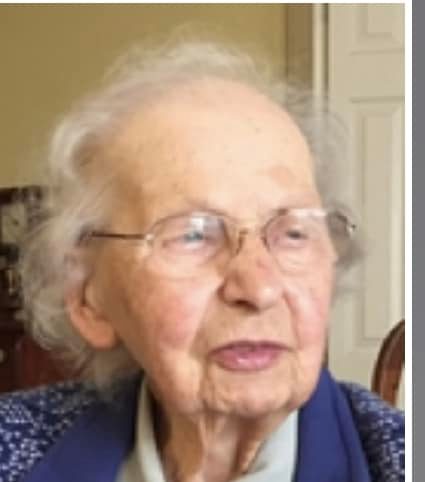 Friend of Alliance College Eternal / Alliance Krakow Festival Staff. Irene Marie “EA” Jakubowski, at age 98, of Pittsburgh, formerly of Everson, PA, on Wednesday, December 29, 2021.
Beloved Daughter of the late Francis and Martha Jakubowski; Sister of Cecilia Whitman and the late Gertrude Long and Teresa Wolak; also survived by eight nieces and nephews, eleven great-nieces and nephews and thirteen great-great nieces and nephews.
Irene was born in Everson, PA, one of 4 girls (Cecile ,Irene, Gertrude, Teresa). She attended St. Joseph’s Grade School and Scottdale High where she tried to take a drafting course but was told it was only open to boys. Instead she had to be satisfied with additional art courses. After graduating, she and her sister Cecile came to Pittsburgh where they enrolled at Pitt’s Evening School of Engineering.

While attending, a representative from Westinghouse came and interviewed students for their engineering department. Irene was hired and was told it was to be a “temporary” position. The females hired had to agree to leave when the boys returned from service. The temporary position lasted 47 years. While working in the control engineering department, she was transferred to Buffalo, NY and later to the Bettis Atomic Power Laboratory. Here she was one of three technical illustrators. One highlight of her Bettis period was the launching of the submarine, “Nautilus,” the first nuclear powered submarine.

In her spare time, she was asked to join the Pilot Club of Pittsburgh, a branch of an international service organization. From 1968 Irene had been president six different times. The members volunteer time and financial support for Children’s Institute, Emmaus & Camp Variety for Kids. Their primary goal is to help the handicapped, both physical & brain disorders.
Irene’s Polish connection had been on-going. She was a member of the Polish Arts League. She and Chester Jakoski published the Palette, the Polish Arts League monthly newsletter for three years.
Irene has helped Larry Koslowski with the Alliance College’s Festivals Folkfest, and the Polishfest. She had also participated at festivals in Cheektowaga, NY, and Starfest with Father Krysa, at Orchard Lake, Michigan.
Irene and Irene Addams were asked to make a Polish diorama for the Children’s Museum. It had been on display at a number of events since then. Irene helped with the Polish programs at the Ellis School, Sterrett Classica Academy and for the first time at Mount Lebanon High School.
In addition to the above Irene enjoyed traveling. After sight-seeing and camping in the United States, she decided to cross the Atlantic. Starting in 1965 with a tour of eight European countries and later seven trips to Poland; four were sight-seeing, two attending dance festivals with Larry Kozlowski and one ethnographic trip with Father Krysa and friends from Buffalo, NY. Her other trips were to Spain, England, Scotland, Wales and a short to Rome and a return trip to Italy.
Irene was member of the Polish Women’s Alliance, Group 224 and the Polish Falcons Nest 118. Also, she had been Vice President of Polish Cultural Council, Vice President of the Polish Arts League, a member of the Bal Polonaise Committee, and Secretary of the Polish Room at the University of Pittsburgh. She also volunteered at WQED and Brighton Heights Citizens Federation.