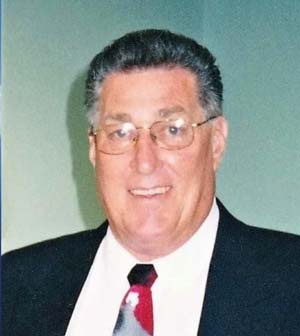 James “Jim” Lewis Hodge, Jr., of Brookfield, Ohio, entered into the Celestial Lodge above on Sunday, November 7, 2021, while a patient at St. Elizabeth’s Health Center, Youngstown, Ohio, following a brief illness. He was 82.
Jim was born August 1, 1939, at home in Brookfield, a son to James L. & Catherine G. (Heath) Hodge. He graduated from Brookfield High School in 1958, where he showcased his talents on the gridiron playing on the undefeated teams of ’55 and ’56.
He attended Louisiana State University on a football scholarship and received an Associate’s Degree in Mechanical Engineering from Alliance College.
On June 22, 1961, he exchanged vows with the former Sandra “Sandi” Bailey. Together they started a family, and born to this union were three daughters: Stacia, Kristin and Stefanie.
He supported his family working as an engineer at the former Damascus Tube Company, Transfer, Pennsylvania. In addition, he was a former facilities manager at First National Bank.
Jim was a member of the Brookfield United Methodist Church, Jerusalem Lodge #19 F&AM, Hartford, Ohio, Al Koran Shrine, Cleveland, Ohio, and the Brookfield High School Athletic Hall of Fame.
In his spare time, he was an avid Ohio State Buckeye and Cleveland Browns fan. He also enjoyed fishing, hunting and tinkering around his house. He was a huge Brookfield Warrior supporter. Most of all, Jim looked forward to attending the activities of his grandkids.
Jim was a gentleman who loved his family and his community. He will be greatly missed.
Survivors include: his bride, Sandi; his daughters, Stacia L. Pascale, Kristin A. (Joseph) Drapola and Stefanie M. (Daniel) Quinlan, all of Brookfield; his grandchildren, Peter, Preston (Allison), Jimmy (Haley), Jeremy, Alisha (Zach), Kenzie (Caleb), and Bailey; his great-grandson, Oliver; his sisters, Diane (Edward) Petsko, Cathy Scharba, Judy (Daniel) Bottar, all of Brookfield, and Shelly (Tim) Karabin, of Hubbard, Ohio; Tony Petola, William Hacker, Pietro Pascale and his extended family.
He was preceded in death by his parents; sisters, Bonnie Petola & Debbie Hacker and brother-in-law, Andrew Scharba.
As suggested by his family, memorial contributions can be made to the Athletic Department of the Brookfield Local Schools.