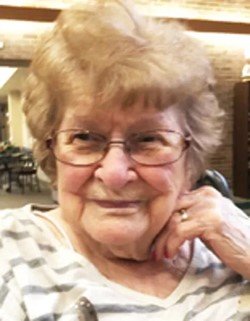 The youngest of four, Marie was born in Chicago, Illinois. Her family moved to a variety of places and settled first in Youngstown, Ohio and then the Shenango Valley where she graduated high school. She studied nursing at Case Western Reserve and became a practicing RN.

On February 4, 1950, she married Michael Halliday and supported him while he studied law at the University of Pittsburgh. In 1951, the young couple gave birth to a daughter, Susan, who was tragically taken from them by illness three years later. Upon her husband Michael’s passing the bar in 1954, the young couple, for reasons unknown yet fortuitous, chose to move to Greenville, Pa. It was fortuitous because it was a community she became an integral part of and loved for the rest her life.

She and her husband purchased The Hotel William Baker, which she managed until its sale in 1985, whereupon they purchased The Riverside Inn at Cambridge Springs, with her being the General Manager, and on at least one occasion, the dishwasher. She worked tirelessly at the Riverside until its demise in May of 2017.

She was active in many ways in her community and church. As examples, in her church, she sang in and served as secretary of the church choir, played second violin in and served as Secretary for the Greenville Symphony, served on the Greenville Memorial Hospital Auxiliary Board, and raised two children, Hannah and Jay. In 1982, she received a Bachelor of Arts degree in accounting from Thiel College. Known for her passion, resilience, strength, hard work, and generosity. She loved her family and friends and to ski, golf, play bridge and tennis.

She was married to her husband, Michael, for over 68 years until his passing on December 31, 2018. She is survived by her daughter, Hannah Martel of Florida, her granddaughter Juliette, and her son, Michael Jay, of New York.

After a long and fulfilling life, May She Rest In Peace.