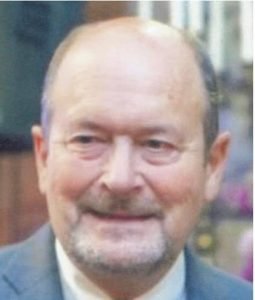 We are deeply sorrowed to announce the passing of Richard Thomas Gray on August 22, 2022, at the age of 74. He was born on May 4, 1948, the son of the late Joseph “Bud” and Eileen Gray. He married Diane Besaw on August 19, 1972. Together they shared a wonderful life for 50 years.
He was a graduate of St. Agatha’s School, Alliance College in Cambridge Springs, with a degree in business, and was an Air Force Veteran. He lived in Meadville for 48 years where he grew up and raised his family. He later retired to Wilmington, NC in 1996.
He was a proud co-owner of the family business, Smith-Gray, which operated in the Meadville community for 55 years. He was a former member of the Kiwanis Club of Meadville, Iroquois Boating and Fishing Club, and Meadville Country Club.
Prior to moving to Wilmington, he was an active member of St. Brigid Church and current member of Immaculate Conception Church in Wilmington.
Rick will be remembered for the love and dedication he had towards his family and friends, his strong work ethic, and his endless generosity to others.
He enjoyed antiquing, watching music concerts in his theater room, golfing, boating down the intracoastal waterway, keeping track with the stock market trends, traveling, socializing, and entertaining his friends in his home.
His memory will be cherished and kept alive by his wife, Diane; children, Brian Gray (Rebecca) of Parkton, MD and Emily Vick (James) of Arvada, CO; five grandchildren, Maxwell, Broderick, Sullivan, and Evelyn Gray, and Clara Vick; brother, David Gray (Kathy); sister, Carol Ann Gray; and several nieces and nephews.
In addition to his parents, he was preceded in death by his brother, Bill Gray and sister-in-law, Cindy Gray.
Memories and condolences may be shared at www.waidfuneralhome.net