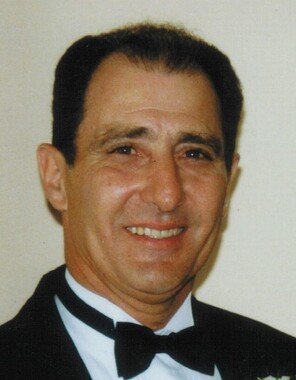 Sam was born at home in Meadville on January 24, 1934, a son of the late James J. and Carmella (Abbondanza) Pendolino.

He was a lifetime member of St. Mary of Grace Roman Catholic Church where he volunteered his time, along with his wife, Nina, to numerous church activities.
In 1997 Sam retired from the US Postal Service where he had been employed since 1968. He had previously been employed by the Railroad for a period of ten years. A Korean Conflict veteran, Sam was drafted into the US Army on December 17, 1953 where he served his country honorably until December 8, 1955. Much of his service time was spent in France and Germany. Sam was a 1953 graduate of Meadville High School where he was an outstanding athlete. He went on to Western Kentucky University on a full football scholarship and following the war, attended the former Alliance College. Sam was a lifetime member of the Italian Civic Club. He enjoyed golfing, reading and following sports. He always looked forward to the daily home cooked meals that Nina prepared and after her passing, he enjoyed the meals that his children would prepare and provide. Although humble, Sam was very proud of his family as they were his life.

In addition to his parents and his wife Nina of 55 years, Sam was preceded in death by a sister in law Marie Pendolino.
Family and friends are invited to call on Monday, September 27, 2021 from 3-7 PM at STEPHEN P. MIZNER FUNERAL HOME & CREMATION SERVICES, INC., 404 CHESTNUT ST. MEADVILLE, where a scripture service will be held at 6:30 PM.

A Mass of Christian Burial will be celebrated at 10 AM on Tuesday at Epiphany of the Lord Parish, St. Mary of Grace Church, 1085 Water St., Meadville, with Fr. Jeff Lucas, Pastor, officiating.

Sam will be laid to rest with his wife, Nina, in St. Brigid Cemetery with Full Military Honors by VFW Post #2006.