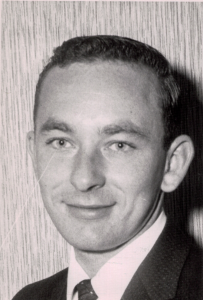 Obituary for Stanley M. Wlazelek, Jr. (1932-2019) Stanley M. Wlazelek, Jr., age 86 formerly of Swedesburg, passed away peacefully on Wednesday, May 22, 2019 in Philadelphia. Mr. Wlazelek was born in Conshohocken and was the son of the late Stanley M. Wlazelek, Sr. and the late Stella Knych Wlazelek, the devoted husband of the late Mary Paytas Wlazelek, the loving father of Michael M. Wlazelek (Tina) of Lower Providence Twp., Michele M. Bubb (David) of Skippack, and Kevin J. Wlazelek of Eagleville, the adoring grandfather of Tyler Wlazelek, Brandon Wlazelek, Brittany Wlazelek, Daniel Bubb and Matthew Bubb. In addition, he was the cherished brother of Wanda Opielski (Frank) of King of Prussia.Stanley “Staś “ (pronounced “Stash”) briefly attended Upper Merion High School and then graduated from St. John Kanty Prep in Erie, PA, Class of 1950. He then earned his B.S. in Biology at Alliance College in Cambridge Springs, PA in 1954. At Alliance, Stanley received the Hilltopper award for attaining the highest scholastic average throughout his 4-year tenure, he was President of the Tau Sigma Pi Fraternity, Junior Class President, Member of the Chemical Society, played intramural sports, and pitched for the Varsity Baseball team where he recorded a no-hitter and was their first pitcher with a winning record. Mr. Wlazelek was the first graduate of Alliance to be accepted into an accredited medical school. He was accepted into Georgetown University Medical School and studied there for 2 years until he joined the U.S. Army, serving our country in 1956-1957 as a radio operator based in Germany. In 1959, Stanley’s father retired from Swedesburg Bakery and Stanley took over the operation of the bakery, making breads, rolls, sticky buns, doughnuts and cakes. It was a 24 hour a day operation.Stanley was a devoted father and grandfather; he cherished every moment with his family. In his spare time, he enjoyed watching war movies and westerns, listening to Polka music, playing the clarinet, cheering for the Eagles and lounging in the sun at Hilton Head Island in South Carolina.Relatives and friends are invited to his viewings on Friday, May 24 from 6 to 8 p.m. and Saturday, May 25 from 9 to 10:15 a.m. at The Bernard S. Gutkowski Funeral Home, 305 Jefferson Street, Swedesburg, Pa., 19405, 610-275-6385, Keith J. Murphy, F.D. and his Funeral Mass, also on Saturday at 10:30 a.m. at Sacred Heart Church, 120 Jefferson Street, Swedesburg. Interment will follow in Calvary Cemetery.The family would appreciate memorial donations to Peter Becker Community, 800 Maple Ave., Harleysville, Pa., 19438.