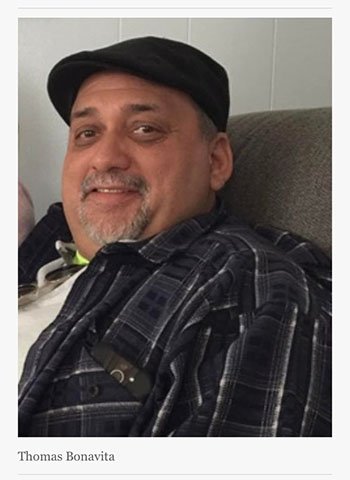 Thomas “Tommy” Bonavita, 58, of Warren, Pa., died Friday morning, Feb. 11, 2022, as the result of Covid, at AHN-St. Vincent Hospital, Erie, Pa.  He was born Jan. 12, 1964, in Warren, Pa. He is the son of Patricia Broderick (Bonavita) and Joseph A. Bonavita.
Tom was a Warren area resident most of his life and a 1982 graduate of Warren Area High School. He excelled at basketball which he played while at Alliance College in Cambridge Springs, Pa. He enjoyed swimming, bicycling and an avid movie buff, and always a Star Trek fan. He was a diehard Cleveland Browns fan. He especially enjoyed cooking and had been employed for many years at Legends Restaurant as a part-time chef.
He was planning on returning to Legends after leaving Keystone this past July, where he had been station manager for eight years. Much of Tom’s work life was in industrial lighting, as sales or district manager, with several different employers.
He is survived by his mother, Patricia Broderick of Warren, Pa.; his father and stepmother, Joseph A. and Karen Bonavita of Aiken, S.C.; one brother, Joseph P. Bonavita; miece, Kyrah Monhey and her daughter, Quinn Monhey, niece, Sarah and Tyler Sanders her son, Brantley; aunt and uncle, Peg and Sam Manno and cousin, Jessica of Warren, Pa., aunt and uncle, Mary and Jim Muntz, and cousins; Jake and Zack of Frewsburg, N.Y.
He was preceded in death by his maternal grandparents, Paul and Beatrice Songer Broderick; paternal grandparents, Thomas and Antionette Minon Bonavita; his faithful fur baby, Josh, he had 17 years.
A celebration of Tom’s life will be held at the convenience of the family.
Those wishing to send condolences may do so by visiting www.lewisfuneral homeinc.com