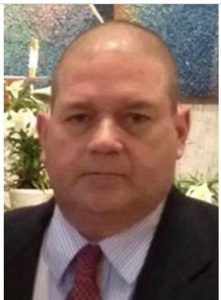 Condolences to Billy’s family. A friend to so many alums – he will be missed….
William D. “Billy” Richards, Jr., 66 of New Castle passed away July 4, 2021, at Allegheny General Hospital in Pittsburgh, PA.
William was born on November 26,1954, in New Castle, the son of the late William D. and Jane (Carr) Richards, Sr. Bill was a graduate of New Castle High School, class of 1972 and went on to earn a bachelor’s degree in business from Alliance College in 1976.
In early years, Bill was employed by Universal Rundle and later retired from Ajax Tocco in Warren, Ohio. He was an avid golfer and enjoyed playing with his friends and family. He loved running and completed three marathons. Bill was proud to be a Certified NRA Instructor and enjoyed teaching gun safety classes at the Lawrence County Sportsman’s Club. Bill liked to socialize and was known to share stories and reminiscence. He was a long time member of the Elks BPOE #69. Most importantly, he adored his family, especially his grandchildren who affectionately called him “Ga”.
Billy married Antonetta (Laurenza) Richards in 1976 and she survives him at home. In addition to his wife, Bill is survived by three sons, Stephen W. (Laura Glenn) Richards, and Andrew D. (Morgan) Richards, both of New Castle, and William (Lauren) Richards of Erie, PA; brother, Jeff L. (Michel Dean) Richards of New Castle; and six grandchildren Jack, Rowan, Tate, Cade, Quinn and Sophie Richards.
In addition to his parents, Bill was preceded in death by his sister, Elizabeth Richards.
Calling hours will be at the Noga Funeral Home Inc. 1142 Mill Street, on Wednesday July 7, 2021 from 4 to 7p.m.
A procession will leave the funeral home at 10 a.m. for a Mass of Christian Burial at 10:30 a.m. on Thursday, July 8, 2021 at Holy Spirit Parish-St. Vitus site. Rev. Brendan Dawson will officiate. Burial will be at a later date.