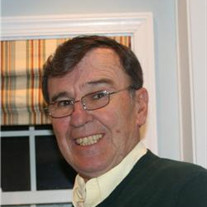 William R. Saunders “Bill”, of Deptford, passed away on December 23, 2015, at Inspira Medical Center, Woodbury, after a long illness. He was 72. Loving husband of Janice H. (nee Hatheway) for forty-nine years. Father of Beth A. Rohlfing of Lansdale, PA, Cynthia M. Higgins (Steven) of Glen Mills, PA and Amy C. Milo (Scott) of Havertown, PA. Brother of Pauline Andrews (Daniel Okrent) of Long Island, NY, Louise Franklin (Walter) of Jupiter, FL and Thomas Andrews of Lakeland, FL. Grandfather of Emily Rohlfing, Jared Rohlfing, Sara Higgins, Grace Milo, Lauren Milo and Cecilia Milo. Close friend of James Rodi (Patricia) of Runnemede.
Bill was born in Sayre, Pa, spent his early childhood in Duryea, Pa. and graduated from Trenton High School in 1961. He received a BA from Alliance College (Cambridge Springs, Pa) in 1965, then pursued graduate studies at the College of New Jersey (Trenton State), and Rutgers University, where he concentrated on studies in Public Administration and Urban and Regional Planning. Bill began his career in municipal administration as Business Administrator for New Brunswick, NJ, in 1970. He served in several NJ municipalities in similar municipal administrative roles, including East Brunswick, West Deptford Township, Sparta, Mahwah, and Deptford Township. While in Sparta, he was a member of the Sparta Board of Education, and spent several years as the manager of Lake Mohawk, a private lake community located within Sparta Township. After his retirement in 2007, he enjoyed golfing, traveling and spending time with his beloved grandchildren. Bill was a member of Holy Angels Parish, the Knights of Columbus, Charles P. McColgan #11713, and the Deptford Elks #2708.